Traveling at top speed on paved roads, windows rolled up, the A/C blasting and music blaring, is to go on a race against the clock–and against nature. Enclosed behind glass, the treetops and grasses outside merge into a fuzzy green wall, any life inside the vegetation hidden and forgotten.

The Colombian chiva, also known as a “ladder”, is a truck converted into a bus, adapted to road conditions in the rural mountainous area of the paisa coffee-growing region, and the traditional form of public transportation in the Colombian coffee lands of the central Andes range.

How to distinguish a chiva from the multitude of other forms of public transport? While many buses and trucks in Colombian cities have a spattering of the patriotic red, yellow, and blue, the chiva is a colorful macaw. Whereas the municipal buses limit their paint to somber lines, the chiva is a frenzy of exotic geometric designs. The artist Carlos Pineda traced its similarities to the mandalas of India and published a coloring book (for children and adults alike) to meditate on the mandalas of the chivas converted into black and white. To watch the process and lose yourself in the dizzying video of the designs, watch until the end of “Mandalas del Camino“.

Another essential design element of the ladder bus is a lack of windows along the passenger seats. This allows drivers and their assistants to step directly onto the wooden frame and use the entire vehicle as a ladder to load onto the roof the farmers’ sacks of goods: from jute bags of green coffee to sell in the village to sacks of rice bought on the return trip. It wouldn’t be unusual to see a pig or chicken heaved onto the roof, but one day I would love to see a chiva (in Spanish it means goat) carrying an actual goat!

A breeze sweeps your skin. The slow-moving vehicle itself doesn’t generate much of a breeze, allowing you time to observe in detail nature passing by within arm’s reach on the roadside. It is an opportunity to be in contact with natural life, and with human life. Instead of individual chairs, passengers sit side by side on a single long bench, like attending one of the Catholic churches whose spires tower above every paisa village.

The other passengers are surely peasants, and in the paisa coffee zone of Antioquia, Caldas, Quindío, and Risaralda, they are most likely coffee growers. According to the Tourist Guide of Antioquia, this form of transportation “arrived in Antioquia in 1908”. The Antioquian municipality of Andes, the commercial capital of the southwest and hub of the coffee economy of Antioquia for more than 100 years, declared in 2004 that the chiva was part of their cultural heritage.

At the Andes transportation terminal, “55 chivas that still provide regular service to the 62 rural villages of the municipality” are stationed. Daniel Augusto Cifuentes Sierra captured this scene in this photograph, published in the 2014 book Vistas de Antioquia by the Viztaz Foundation, dedicated to preserving the area’s cultural memory. According to the paisa photographer who works with coffee growers in the area, “Ladder buses are without a doubt the most colorful jewels of Antioquia and the main means of transport in the rural area.”

The Andean Coffee Growers Cooperative pays homage to the chivas that transport their members with coffee bags to sell, toast, and export to countries like the United States. In a special edition, the packaging of their roasted coffee bags is stamped with colorful chiva designs.

This is the coffee we drink. Coffee enveloped in the peasant tradition. As hot as it gets in the summer in Texas, I try to take a few sips sitting outside, with the breeze playing on my skin, just like when riding a chiva. 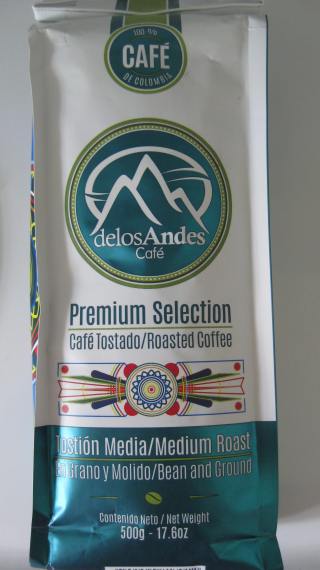 Do you dare to roll down the window, stick out your arm, and feel nature? Hop on the chiva to enjoy this coffee produced in the green mountains of the Andes.